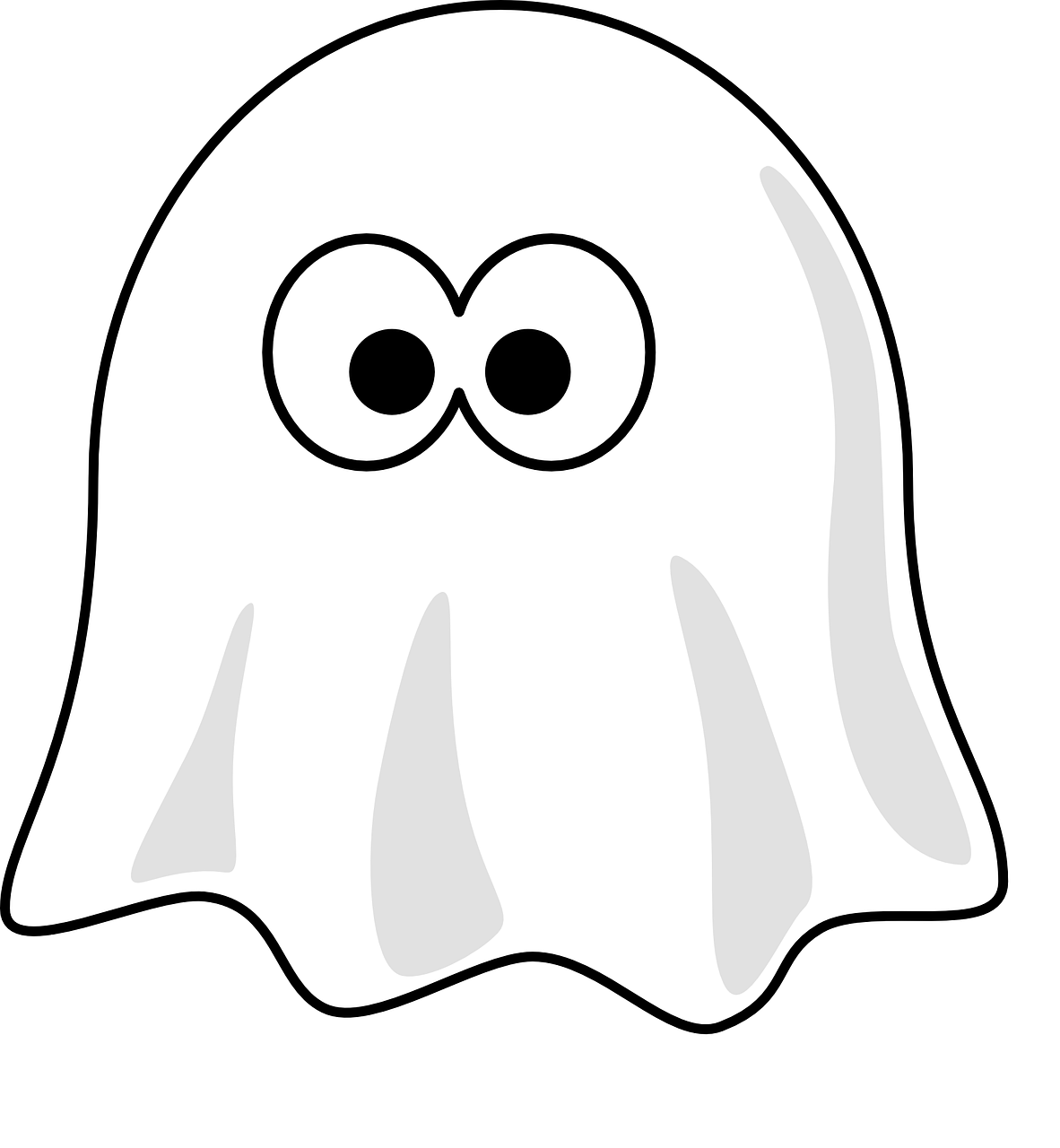 A slightly different blog offering this time round – a story for the season!

‘Whooahoooo!’ said the strange looking figure by the door.

Dylan and Adam looked up at it and then at each other. Then they went back to playing with their toys.

‘Whooahoooahoooahooo!’ the figure insisted louder this time gliding slowly into the room with its arms raised. It looked like a bedsheet with a face and arms.

And legs with fluffy bunny slippers on its feet.

‘Can I help you?’ asked Adam looking up.

The figure sighed and dropped its arms to its sides. It was difficult to know for sure, but it seemed to sag inside.

‘Aren’t you scared?’ it asked. Then it sniffed.

Adam and Dylan looked at each other, then around their bedroom, and then finally, back to the figure.

‘Scared of what?’ asked Dylan.

‘Of me, of course!’ snapped the figure dropping down onto a bean bag.

‘Should we be?’ asked Dylan.

‘Yes!’ he cried and slumped back deeper into the bean bag, which didn’t seem to move at all.

The boys looked at each other again. Dylan shrugged and went back to playing. Adam sidled over to the strange boy and sat next to him.

‘Er, why should we be afraid of you?’ he asked.

The boy tutted. ‘Because I’m a ghost!’ he said. Then he sniffed again.

‘Oh,’ said Adam nodding his head in fake understanding. ‘Oh, I see!’ he said, suddenly realising what the boy had said. The ghost stared to cry.

‘I’m a useless ghost,’ he wailed, ‘the only one I ever scare is myself! And if I don’t reach my quota of hauntings this month, they’ll take my sheet away and I’ll have to go to the Scare ‘Em Silly Academy for four years.’ The ghost sniffed once more.

There was a moment’s pause.

‘Well,’ began the ghost, ‘it’s not really just one month, you see, it’s more that this is my last month of not hitting my quota.’ Sniff.

‘Well, I suppose none really.’ Sniff.

‘Oh. And how long have you been ghosting?’

Adam was about to speak again when he felt Dylan’s hand on his arm. He looked at his brother who shook his head gently, so Adam decided not to ask any more questions.

Dylan sat on the other side of the ghost, looked at his brother and nodded gently.

‘Don’t worry,’ said Adam cheerily and he tried to pat the ghost on the back, but his hand just passed straight through him. He pulled his hand away.

‘Sure, we will!’ said Dylan, ‘Adam’s great at scaring our Daddy! He hides in all sorts of places and then jumps out at him and Daddy gets a real fright every time!’

‘Every time?’ asked the ghost in a dubious voice.

‘Every. Single. Time.’ Dylan nodded as he spoked the words.

‘Wow! You must teach me please!’

The boys stared at him.

‘Do you get nervous and anxious a lot?’ asked Adam.

‘Well, we’re going to have to do something about that for a start!’ said Dylan. ‘Let’s find out how you can be scary first and then we’ll think of a suitable name. That sound ok?’

‘Right,’ said Adam, ‘first things first – we have to lose the slippers.’

‘But my feet will get cold!’ whined Sniffy. Sniff.

‘It’s ok, we’ll find something to keep your feet warm, but fluffy bunny slippers just don’t scream “Scary” to me!’

‘I guess you’re right,’ said Sniffy and he took off the slippers.

Dylan handed him a pair of thick socks. ‘This is just for now,’ he said.

‘Right,’ said Adam, ‘talk us through your technique.’

‘Well, I find my targets and sort of drift towards them with my arms out front and say “whoooahoooahoooah” a lot.’

‘You mean like you did when you saw us?’ asked Adam.

‘Oh dear,’ said Adam looking at his brother who was shaking his head in disbelief, ‘this is worse than I thought!’

‘OK,’ said Adam, ‘the thing about frightening people is they mustn’t know you’re there until you are ready to scare them.’

‘Well, you could creep up instead,’ said Adam.

Dylan rolled his eyes. ‘It’s the same thing!’ he shouted.

‘Is it?’ asked Adam dubiously.

‘Sorry,’ said Dylan, ‘I didn’t mean to make you nervous or anxious. The point is that they mustn’t know you’re there. So, you can’t walk towards them slowly in big fluffy bunny slippers with bells on, see?’

‘And don’t start making your “whooah” noises at them from so far away,’ said Adam, ‘wait until you’re right by their ear.’

‘And stop sniffing,’ said Dylan, ‘that will give the game away right from the off!’

‘No way!’ said Adam and he laughed.

Even though the boys couldn’t see Sniffy’s face they felt him sag again.

‘Ok,’ he said standing up straight, ‘what next?’

‘Well, let’s see,’ said Adam looking at Sniffy, ‘I think we need to work on your appearance. You look too nice right now. I think we should put some red on you.’

‘I dunno,’ replied Adam scratching his head, ‘but I know it’s what grown-ups do when they want to make something look scary.’

‘Righty-ho, then,’ said Sniffy and the boys started colouring in patches of red on Sniffy’s white cloak.

‘Next,’ said Dylan when they had finished, ‘is your scary voice thing.’

‘WHOOOHAOOOHAOOO!’ yelled Sniffy. His effort was greeted by blank faces.

‘Ok, try to get a growl in there,’ offered Adam.

‘Hmm, I think I have an idea,’ said Dylan, ‘let’s try it really softly, like a whisper.’

The boys pulled away from Sniffy’s head in disgust.

‘What was that?’ asked Dylan wiggling his finger in his ear.

‘Sorry,’ said Sniffy, ‘I snuffled a little. It happens sometimes.’

‘So, how does it happen?’ asked Dylan.

‘Well, if my sniff is a little too strong, it er, can suck in some of the more solid stuff,’ said Sniffy.

‘That was gross!’ said Adam.

‘Urgh, I feel icky after that!’ said Dylan.

And then the boys looked at each other, grins beaming on their faces.

‘Don’t you get it?’ asked Adam, ‘Your snuffle is your secret weapon!’

‘That’s right,’ agreed Dylan, ‘all you have to do is sneak up, get close to the ear and snuffle at them! They will run a mile with their finger in their ear looking for a doctor to clean it out!’

‘OK, but you have to be able to do it when it matters. Let’s sneak downstairs and try it on Daddy.’

The three boys left the bedroom quietly and crept downstairs. Daddy was asleep in an armchair and Mummy was nowhere to be seen.

‘Right,’ said Adam, ‘sneak up behind Daddy and do your thing and then run as fast as you can so you are gone before he sees you.’

The boys watched from the door as Sniffy moved in behind Daddy’s chair. He paused a moment before… SniffAAAARRRGKKHLE!

Sniffy was out the door as the sound still hung in the air and the three of them raced up to the turn in the stairs so they could see the sitting room door and hall without being spotted. A few moments later Daddy left the room muttering under his breath with his finger wiggling in his ear. He stopped half-way down the hall and appeared to shiver. The boys returned to the bedroom and burst out laughing.

‘Urgh! That is totally gross, dude,’ said Dylan, and then he frowned. ‘The only thing is the name of the sound. Snuffle doesn’t do it justice, it’s just too nice. We need something that says what it does.’

‘I like where you’re going,’ said Dylan, ‘but we need something that will scare and gross out – it’s a snotalanche!’

‘Perfect!’ agreed Adam and they high fived each other. Then they turned to high-five Sniffy only to find him sagging on the bean bag again.

‘Well, if my name was Sniffy because I sniffed a lot. Will my new name be Snotty because of my snotalanche? If it is, I don’t like it.’

‘Fair,’ said Dylan, ‘but it doesn’t have to be. And it shouldn’t be. I think we can come up with something a bit scarier than that.’

‘Well, you have two nostrils, right?’

‘And they can both do a snotalanche, yeah?’

‘Well, how about the Double-Barrelled Snotgun?’

‘Cool,’ said Adam, ‘it sounds like a super weapon.’

‘Yeah,’ said Dylan a little flatly, ‘it does. But we need it to sound like a super villain. The Double-Barrelled Snotgun is his weapon for sure, but he needs a name.’

The boys looked at the ghost formerly known as Sniffy, who appeared to be grinning.

‘Enter’, he said and then paused for dramatic effect:

Please feel free to take this little story and personalise it using your kids’ names instead of Dylan and Adam. Read it to them and enjoy it over Halloween and beyond!

We have stuck a copyright on Enter the Bogeyman to protect us against resale, but we have no problem with you using it for fun with your own kids. And if you want to take it a step further and build a personalised book using photos of your kids, Snapfish has gazillions of fab Halloween embellishments on their website. Go ahead and have some fun!

SuperKid Stories, a brand of Books & Books Ltd, has asserted its right under the Copyright, Designs and Patents Act 1988 to be identified as the author of this work. All rights reserved. No part of this publication may be reproduced, stored in a retrieval system or transmitted in any form, or by any means (electronic, mechanical or otherwise) without the prior written permission of both the copyright owner and the publisher.